MENU
As the year 2000 approached, lists of all kinds began to appear ranking the most important, most popular, most significant…etc…people and things of the last century. Time magazine rated Franklin Delano Roosevelt the most important and significant President of the United States in the 20th century. He was the leader of our nation during the time when “the greatest generation” came of age during the course of The Great Depression and WW II. The stress of leading the U.S. and working with its allies through these two cataclysmic events took its toll on his health, and it was important for him to find a way to relax every day so that he could continue to face the challenges of his responsibilities.

One of the primary ways in which FDR dealt with the stress of his responsibilities was to convene each day in his second floor study in the White House a gathering of friends and associates that he called “The Children’s Hour.” This room was FDR’s favorite room in the White House, filled with so many of the things he loved: model ships, naval prints and maps on the walls, his beloved stamp collection, book cases overflowing with his favorite texts,  and overstuffed leather chairs and sofas in which visitors could lounge in the peaceful atmosphere of the room. It was in this room that FDR transacted much of the important business of his Presidency – but NOT during “The Children’s Hour.” During this interlude, which might last for a couple of hours, no business of state or any serious discussions of any sort were to be undertaken.

Their relationship had evolved into a political, rather than personal, partnership because of Eleanor’s discovery in 1918 of an affair he was having while he was serving as  Undersecretary of the Navy in President Woodrow Wilson’s cabinet. On his way back from an official trip to England (he met Winston Churchill, who did not think much of the young man) on a U.S. naval ship, he came down with a severe case of the Spanish flu. Upon arrival in New York City, FDR was brought home to be cared for. Eleanor, between her nursing duties, unpacked his suitcases and discovered a packet of letters from  Lucy Mercer, who was Eleanor’s social secretary and, practically speaking, a close member of their family circle.

When Franklin recovered she confronted him with the letters and offered him a divorce if he wanted one. But FDR’s mother forbade it and threatened to cut Franklin out of the family’s inheritance if he proceeded. She was not about to allow her son to sacrifice his future political career over this matter. Eleanor gave Franklin an ultimatum: either promise to never see Lucy Mercer again or she would seek a divorce herself. He promised to never see her again. He did not keep this promise. Lucy and FDR kept in contact over the years. He sent her a secret invitation and ticket to attend his inauguration as President in 1933 and supplied her with a private car. Their “secret” meetings were frequent enough that the Secret Service had a code name for Lucy Mercer, “Mrs. Johnson.” She visited him in the White House a number of times when Eleanor was away, saw him at the winter White House in Warm Springs, Georgia, and was with him when he died there of a cerebral hemorrhage on April 12, 1945. Many historical sources consider her to be the love of his life. I highly recommend the book Lucy, by Ellen Feldman, a historical novel told in Lucy’s voice that offers an interesting perspective on the story of their relationship. 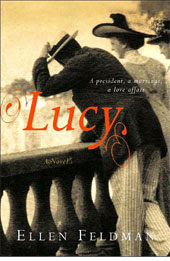 END OF DIGRESSION
So Eleanor’s presence at these “Children’s Hour” gatherings was very rare. On one occasion, however, the following incident supposedly occurred. The atmosphere was loose and loud in the second floor study when the door opened and Eleanor strode into the room. She raised her head slightly and gazed at the assembled people, looking down her nose a bit, giving every indication of her disapproval of this waste of precious time. The guests became quiet, wondering what to make of her surprising appearance. FDR turned to her and asked what she had been doing all day. She answered that she had attended a number of important meetings and had gathered some crucial information concerning official White House business. The suggestion was that she had been busy at work while those present had been wasting time drinking and gossiping. As she walked further into the room she passed close by her husband’s wheelchair, which was placed next to the table full of alcoholic beverages necessary for him to mix drinks for his guests.
NOTE:
It’s called a “martini,” dating from 1899, because of the famous brand of vermouth, “Martini and Rossi,” which was popularly used to make this drink. Other word historians think there actually was a bartender named Martini, either Spanish or Italian, who invented the drink and gave it his name, thus immortalizing himself. Take your pick.
Just as Eleanor was close to FDR he raised his hand and loudly slapped her ass with the palm of his hand and exclaimed, “Well, did you talk about that big, fat ass of yours at any of those meetings today?” All of the guests were stunned. Silence fell upon the room. After all, the President had just slapped Eleanor on the ass in public. What was going to happen next? Eleanor stopped immediately, remaining as still as a statue, her anger rising, but she managed to regain control of herself. She then turned around, faced FDR and said, “Actually, Franklin, your name never came up once during any of my meetings today.” Then she walked out of the room. (Note: I relate this with a touch of skepticism because various versions of this joke existed prior to this period. BUT, it does two things I appreciate. First, it makes Franklin and Eleanor into more than two-dimensional cardboard characters, especially in light of the Lucy Mercer affair. The tension between husband and wife is highlighted in this story. Second, it is a “hook” that provides the potential to engage individuals in a larger picture being presented concerning The Great Depression, WW II and the relationship between FDR and Eleanor.)

BACK TO THE RADIO, SWITCHING GEARS:
What might have been playing on the radio in the background as the preceding incident took place? How about this song, one of the classics of the big band era? I equate it with the ever-present optimism that FDR modeled for those around him.

And, just for fun, and in honor of “The Children’s Hour,” let’s take a look at the “jitterbug” dancing that was done by young people (children?) during the years FDR was in the White House. Although he could not dance himself, I could imagine him daydreaming of doing this dance with a woman he loved. And who would that be?
And if you have the time, here is a nine minute film that was shown as a short subject in movie theaters in 1944. It takes viewers through the older dances (the waltz, for example) that contributed steps to the “jitterbug” and “boogie-woogie” dance craze of the 1940s. It’s a terrific film and an interesting historical piece, but if you are short of time (which I hope you are not) fast forward to the last half of the film when the dancers really show their stuff. It’s amazing!

FINISHING UP: FDR, “THE CHILDREN’S HOUR,” AND ELEANOR.

The complex nature of the relationship between Franklin and Eleanor has been written about and speculated upon extensively. They were not cardboard characters living two-dimensional lives. My post has been an attempt to bring a measure of consideration to their humanity, their strengths and weaknesses and the love and loss they felt for each other. Near the end of FDR’s life in late 1944 and early 1945 he was extremely ill. The picture below illustrates the extent to which the pressures of his work had taken their toll on his health.


No matter how ill he was, however, he still maintained the tradition of “The Children’s Hour.” It is a touching detail of the intricacies of their relationship, that near the end of his life FDR asked Eleanor to come in to his beloved second floor study to mix and pour the martinis and other drinks for his guests who came for his daily ritual gathering. She did so without complaint or judgment. And it is with that loving gesture toward him in my mind that I wish to end the story.

NOTE: READ THIS BOOK.
ANOTHER RECOMMENDATION:
This book deals with the women in FDR’s life who shaped and influenced his character. It centers on Lucy Mercer, but includes a number of others who played crucial roles in his life. FDR’s infidelity is shown to have helped create the energy in Eleanor to become one of the most influential women in history. Most of Eleanor’s finest achievements occurred after Franklin’s death. 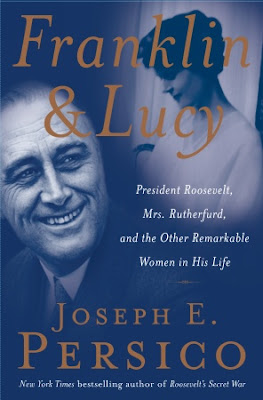