Puritan parents generally did not dote upon their children. At meals, the adults ate first, sitting at table while the children stood behind the adults, ready to serve them until they were finished eating. When the adults left the table, then, and only then, did the children sit down to eat their meal.

In raising children the Puritan parent held to the basic belief that both God and the devil were ever present in the lives of their family. When a child misbehaved it was believed that he/she was not just being inquisitive or testing the limits of parental authority. They believed, literally, that any misbehavior was evidence of satanic or evil possession of the child. And the manner in which a parent drove out this evil spirit was to beat the body of the child, the belief being that this was the most effective way of persuading an evil spirit to leave. 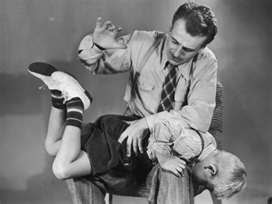 “Spanking” and corporal punishment are holdovers from our Puritan past. “Spare the rod and spoil the child” was a phrase often referenced by Puritan parents and ministers.

If the child continued to misbehave, the parent believed that the spirit was still inside their child, and would beat them again. This process continued until misbehavior ceased. Modern psychology has given us a different perspective on child development and discipline, but the habit the Puritans engaged in is still with us today in a phrase many of us hear occasionally: …”beat the devil” out of someone, or “They really got the devil beat out of them.” These uses only mean that someone was badly beaten and in no way implies that they were possessed by the devil or an evil spirit. However, our Puritan ancestors have had a great effect upon the attitudes and beliefs modern parents sometimes use to discipline their children. What options did Puritan parents have, for example, if their child cursed them?

That this existed at all as a legal option reveals the stern approach Puritan parents took to raising their children.